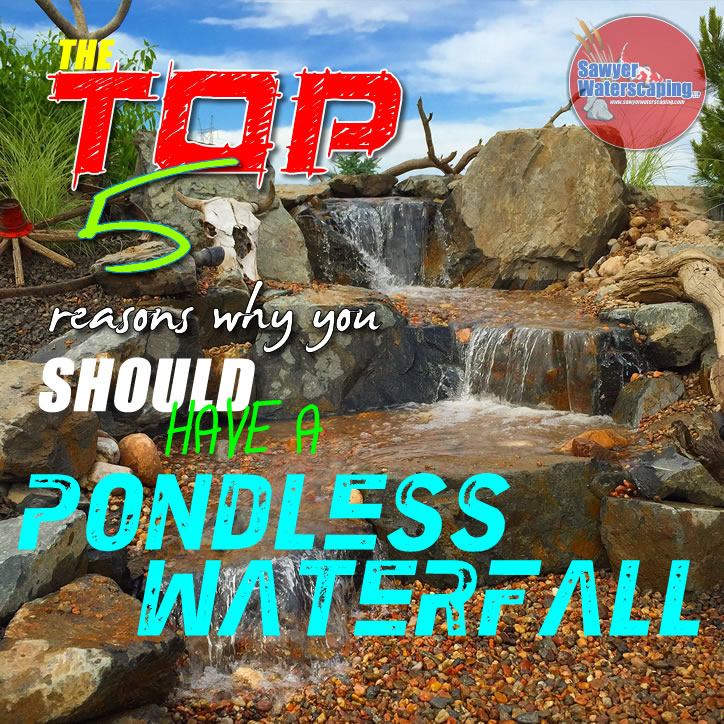 The Top 5 Reasons Why You Should Have a Pond-less Waterfall!

Pond-less waterfalls are simply a re-circulating waterfall/stream without the presence of a pond.  You get a chance to enjoy the sights and sounds of running water without the maintenance of a pond.  Pond-less water features are becoming a more common choice among water feature enthusiasts because they are safer, they cost less, they fit into smaller space and they are easy to maintain.  An ideal option for families with small children, you can add the sights and sounds of a natural waterfall without the safety concerns. Waterfalls also take up less space and can be tucked into any corner of a landscape and are an ideal option for adding curb appeal near the front door.

Before we get into the top 5 reasons why everyone needs a Pond-less Waterfall, let’s explain how it works. It might be difficult to imagine a waterfall and stream without a pond. Where does the water go? A pond-less waterfall works much like a regular pond. The reservoir is dug and then lined with underlayment and EPDM liner. A vault (holds the pump) is placed at the bottom near an edge. It is surrounded by perforated piping and then covered in cobblestone, river rock and filled with water. The water is then circulated from beneath the rocks and gravel by a submersible pump that sits on the bottom of the vault.  The pipe runs from the vault to the top of the waterfall where it flows into a spillway. The spillway collects and distributes the water into an overflowing waterfall. The waterfall flows back down to the reservoir. Since the water level never pools above the level of rocks, it looks as if the water has disappeared.

1. Much Safer than a Pond

3. Cost less than a Pond

Cost can be a big factor when considering the type of water feature you want. In most cases, the price of a pond-less waterfall will be less than a pond because there is less labor involved, as well as less rock and materials. Operating costs are less too, because you are not dealing with a balanced ecosystem. You do not need to use as many pond products or run the pond 24 hours/7 days a week.

Do you know the best part of a pond-less waterfall? Yep, you guessed it… the maintenance is super easy. Since there is no aquatic life, it’s okay to be more aggressive in treating it with the proper algaecides when necessary. Since the water in the reservoir is hidden from the sun, there is also less evaporation. Pond-less waterfalls are typically installed with an automatic fill. Since the reservoir is hidden from view, it is hard to know when to add water.  An auto-fill acts much like a toilet float; when the water level is low, it adds the necessary water. The water source can come from your spigot or your existing irrigation system. Once an auto-fill is installed, you can simply sit back and enjoy.

There is just something special about the sounds of a babbling brook.  Moving water is just so tranquil and relaxing.

“Running water is one of the universal parables, appealing to something primitive and ineradicable in human nature.  Day and night it preaches – sermons without words.”

-Torrey Bradford, The Clerk of the Woods

The pond-less waterfall has made many water enthusiasts who were previously unable to enjoy the sights and sounds of a flowing waterfall, very happy. It’s a great alternative for those who are trying to get their feet wet, or looking to fit a little bit of paradise into their own backyard. When all else fails…go pond-less!

This 2014 project consists of a FountainFalls Water Feature and a small area of xeriscaping.  Sod was first removed because of poor drainage. We then edged the area and excavated for the small pond-less water feature.  FountainFalls are small water features that we came up with around 2005. They are great in flat, small areas. […]

The Cheyenne Pet Clinic Project was completed in 2014.  We removed sod and rock to completely replace it with xeriscaping and a custom fire hydrant waterfall.   Related

We had a blank canvas with the Creel’s backyard.  They wanted their patio larger while enjoying the peaceful sounds of a small water feature.  In addition, we essentially landscaped their entire backyard..with the excellent work of Danny and his crew from Green Lawn Care, who completed the irrigation lines and the sod. The biggest challenge […]

Constructed in 2014, the Crock’s Pond-less Waterfall consists of a 12′ stream and waterfall.  The original design had the waterfall lower in the yard.  So when it was moved up on the higher side, we left the large flagstone steppers essentially in the same location.  By moving the waterfall up, it made it much more […]

The Joannides Pond-less Waterfall was built in the Spring of 2014.  It consists of over a 50′ stream that twists and turns through large moss boulders as it drops more the 15 vertical feet.  The use of over 30 tons of boulders and buff flagstone treads, allows this natural water feature to blend right into the […]

This project is a rebuild of an original water feature we had installed in 2005.  It is a 60′ waterfall with over 30 ton of moss boulders.  We completely removed the existing water feature and backfilled the space.  We removed all of the flagstone steppers running along the side and re-configured them to match the […]

Basalt is a volcanic rock and one of the most common types of rock in the world. Although it is common, it is rare to find the long solid columns of basalt that we use in our products. The skin or crust on the outside of the columns will have a patina that ranges from […]

Gregg is founder/partner of Sawyer Waterscaping in Cheyenne, Wyoming. He built his first pond in his parent's backyard at age 12 and has had a passion for designing and construction natural waterscapes ever since.

Please log in again. The login page will open in a new tab. After logging in you can close it and return to this page.